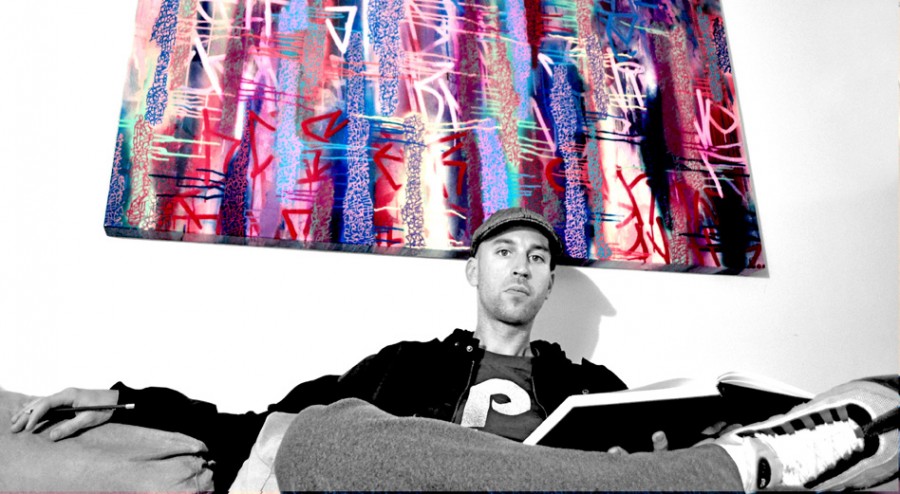 Steven Michael O’Connor is a Los Angeles based contemporary artist whose paintings are undeniably captivating. If you were to classify Steven Michael O’Connor’s work it would fall somewhere between neo-expressionistic to fine-art graffiti. From an artist stand point he seems to be as comfortable painting with his brush as he does his pallet knife and although his techniques seem to vary, his voice is always evident. O’Connor’s work is revered by curators for its presentation and embraced by the public because it’s different, but approachable.

Born in Wilmington, Delaware in 1982 and raised in nearby Newark, Steven Michael O’Connor moved to Knoxville, Tennessee after High school to study Media Arts at the University of Tennessee in 2000 and later Film at New York University. In 2008 he walked away from a career as a television producer to pursue his dream and passion of becoming a visual artist. His work explores several completely different series, each with their own message/narrative. One subject that constantly makes its way into his work is American’s obsession with their television sets. This is most notable in his popular Electronic Heroin Series, a smart take on the overconsumption of TV in our culture.

In just four short years he has climbed from complete obscurity to an award winning fresh-faced artist who’s pieces are popping up in galleries all over Los Angeles. One thing is clear; his innovative blend of Art is visually striking and very popular. From winning “Best in Show” at the prestigious Beverly Hills Art Show to exhibits in the Downtown LA Art Walk at galleries such as Norbert Ellen & the Gloria Delson/Contemporary Arts his pieces are all across LA, even appearing on TV shows such as Bones & Kim Kardashian Show.

The ability to pay his bills with the artwork in this economy is definitely a point of pride for O’Connor. Putting 12-14 hours in a day is par; rumored to be painting straight through holidays and weekends to get his career off the ground…it seems to be working. His art seems to be reaching a wide audience from both first time buyers to established collectors all over the world.

Currently Steven Michael O’Connor is wrapping up some of his biggest commission pieces to date and diving head first into the next stage of his career. The most recent work of this Southern California-based artist are simplified, and stripped down from both pallet to approach. His popular Protein Series, an abstracted “virus” certainly appears to becoming very popular and is at the core of this new body of work.

Steven Michael’s contemporary paintings are pioneering into uncharted territory…which is clearly his goal. If you’re interested in Modern Art and would like to get an idea of what direction the next wave of abstract expressionistic painters are headed then look no further then Steven Michael O’Connor.

Steven Michael O’Connor currently resides in Los Angeles, California with his studio located in Burbank and is currently on display at Artspace Warehouse located in the West Hollywood/Beverly Hills area. The studio visits and gallery tours are by appointment only, for more information on his available artwork, or how to purchase commission pieces please visit the contact page.