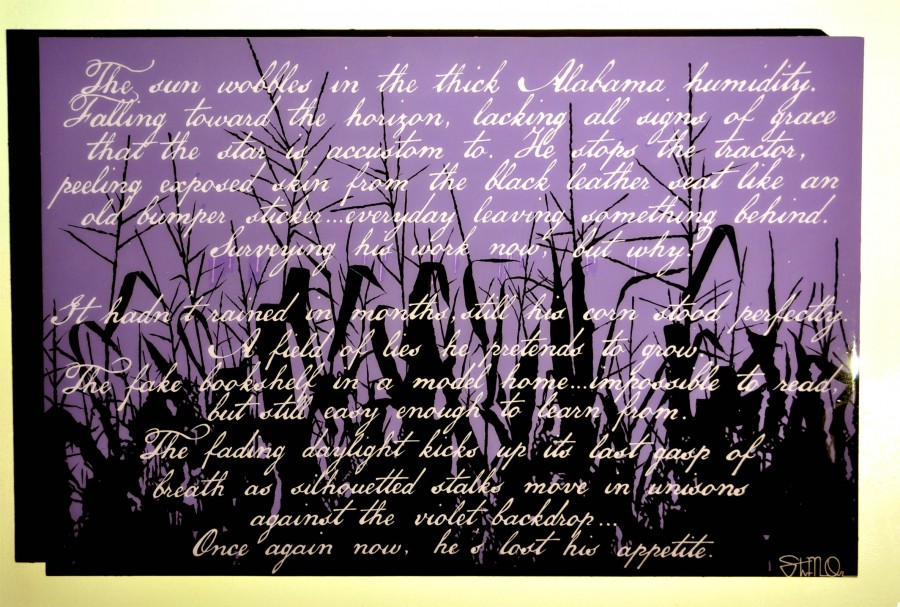 I wrote this poem back in November dealing with the topic of GMOs and thought it’d make for a good painting. The issue of labeling genetically modified foods is an important topic, especially for us here in Cali. Monsanto alone spends millions (I’ve read its anywhere from 8 to 40 million a year) just fighting the California labeling initiative, mainly because they know the public will avoid those altered foods if given the chance.

So to break it down…things like corn seeds are engineered by these corporations then bred with insecticides, altered to increase yield, even posses a tolerance to drought. The problem is that growing and eating these altered foods have severe repercussions on our health and the environment.

I’m not going to get into the health problem side of things (which most evidence suggests there is a clear link to) because this poem/painting is about the environmental damage the GMO crops cause and the violation of the farmers’ rights.

GMOs are considered ‘novel life forms’ so biotech companies obtain patents to restrict their usage (which kind of makes sense since they spend a shit load of money playing god and making these seeds) What’s crazy is they then sue farmers who’s fields get contaminated with those seeds, something that occurs naturally from drifts of neighboring fields. The GMO crops are also responsible for “super bugs” and “super weeds” which are really hard to kill with conventional toxins.

I personally have never met someone who doesn’t want to know what’s in the food they are eating. There are def parts of the world where, unfortunately food is scarce/hard to grow and maybe these gmo crops could help feed the people in those areas, but that is a slippery slope considering the side effects. That’s why most developed countries don’t rock with GMOs because they don’t believe them to be safe…ex Japan, the whole European Union Australia etc…I think we need to be one of those countries.